This story was published on PBS NewsHour on June 5, 2013.

An injured man stands on the main road of the Bab al-Tabbaneh neighborhood in Tripoli, Lebanon, and looks toward Jabal Mohsen, a predominantly Alawite neighborhood. Alawites are the same sect as Syria’s President Bashar al-Assad. Many Sunni Muslims live in Bab al-Tabbaneh and support the rebels fighting the Assad regime.

An injured man stands on the main road of the Bab al-Tabbaneh neighborhood in Tripoli, Lebanon, and looks toward Jabal Mohsen, a predominantly Alawite neighborhood. Alawites are the same sect as Syria’s President Bashar al-Assad. Many Sunni Muslims live in Bab al-Tabbaneh and support the rebels fighting the Assad regime. by Saskia de Melker 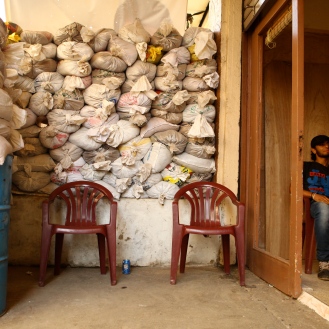 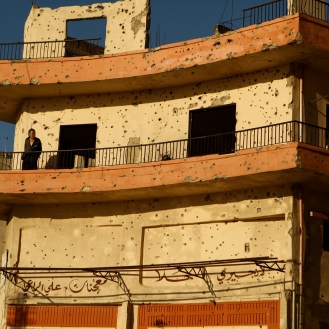 A bullet-ridden apartment building in Jabel Mohsen is almost completely abandoned and is being used as a sniper lookout. by Saskia de Melker 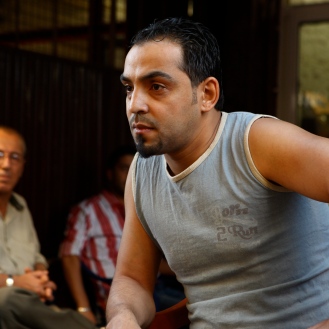 Aboul Suleman manages a street cafe in Jabal Mohsen, but like most young men here, he also has taken up arms. “This is going to continue until the situation in Syria is settled and when President Assad wins in Syria, this will be over.,” he said. by Saskia de Melker 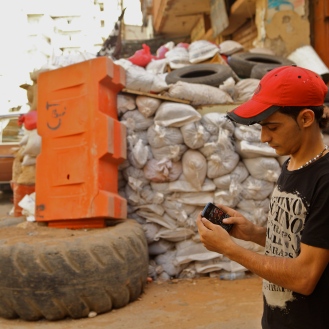 Twenty-one-year-old Ziad Habshiti shows pictures of the gun he uses in Bab al-Tabbaneh battles. He wants to avenge the killing of his 13-year-old brother who was shot in the fighting. by Saskia de Melker 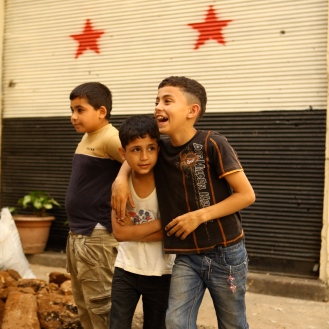 In the Lebanese neighborhood of Bab al-Tabbaneh, people use sandbags to shield their buildings from sniper fire. These children stand in front of a garage painted with the opposition-adopted Syrian flag, showing their support for the rebels. 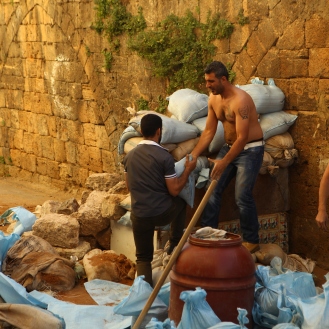 Abu Ali Zemar (center), leader of the Alawite gunmen, helps build a sandbag wall in the neighborhood of Jabel Mohsen. “We are preparing the battle could start at any minute,” he said. Rumors of renewed fighting were spreading through the neighborhoods on Saturday when the PBS NewsHour visited. By Sunday, clashes began again. by Saskia de Melker 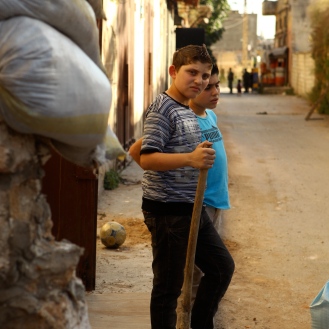 Children take a break from building the sandbag walls in the Lebanese neighborhood of Jabal Mohsen.

TRIPOLI, Lebanon — Walk the streets of the adjacent neighborhoods of Bab al-Tabbaneh and Jabal Mohsen in the Lebanese city of Tripoli and you will find some similarities.

Many businesses are shuttered. Residents have built barriers from sandbags and debris to protect their homes from stray bullets. The streets are devoid of women, but some can be seen peeking from the balconies of their homes. And men, both young and old, gather on the sidewalks carrying guns.

There is a battle raging here that goes far beyond these streets.

“We live day by day. We don’t know if you are going to be alive the next so we buy a coffin before we buy a house,” said one Bab al-Tabbaneh resident. “This is how we are living here.”

In Bab al-Tabbaneh, most residents are Sunni Muslim and support the armed opposition in neighboring Syria. Some young men here have even crossed the border to join the uprising.

Up the hill in Jabal Mohsen, most are Alawite Muslim, a minority group in Lebanon and the same sect as Syrian President Bashar al-Assad.

Dividing them is the aptly named Syria Street.

Sectarian fighting has flared between the two areas since 2008, but the frequency and intensity of clashes has increased over the past two years as the war in Syria has escalated.

May was the deadliest month in the city with 29 people killed and more than 200 wounded. The Lebanese army has moved into the area in an attempt to stop the violence, but there is no indication the violence will end.

“This is going to continue until the situation in Syria is settled,” said Aboul Suleman, a young fighter from Jabal Mohsen.

Watch senior correspondent Margaret Warner’s report on how the Syrian war is inflaming sectarian tensions in Lebanon on Wednesday’s PBS NewsHour. View all of her reports from Lebanon.