This story was published on PBS NewsHour on May 29, 2012 as part of the Coping with Climate Change series.

This floating structure concept by Dutch design firm Waterstudio.NL would use offshore technology similar to the oil storage towers found on the open seas. The sea tree would be moored to the sea bed with a cable system and would provide habitats for animals both above and below the water. 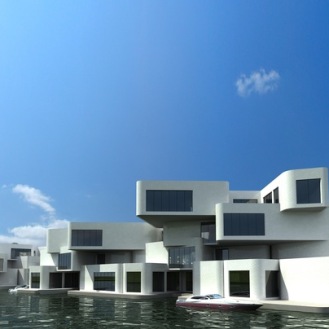 Intended to be Europe’s first floating apartment building, The Citadel would have 60 units with parking spaces and terraces. It’s part of The New Water project that also includes some 600 floating houses between Rotterdam and The Hague to be completed by 2017. by Waterstudio.NL

This housing community would have a unique water management system. The buildings would be fitted with a rainwater recovery system and biological filter systems to use the surrounding water. A wastewater collection tank would sit at the lowest level of the house, and about 80 percent of the wastewater would be converted into gray water, which could be used for non-drinkable purposes. by Monika Wierzba

The U.K.’s first amphibious house was granted full planning permission and is set to be built by Baca Architects on the banks of the River Thames later this year. During dry times, the home will rest on fixed foundations. If it floods, the entire structure will rise with the water but stay tethered. by Baca Architects

For the United Arab Emirates, Waterstudio.NL has designed a floating mosque with an interior of giant funnel-shaped transparent columns that support the roof and allow light inside. 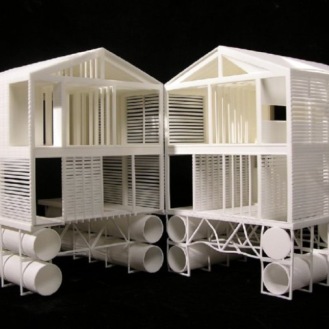 On the Great Lakes, water levels vary from month to month and year to year. This prefabricated house would float atop a structure of steel pontoons, allowing it to fluctuate with the lake’s levels. By MOSArchitects 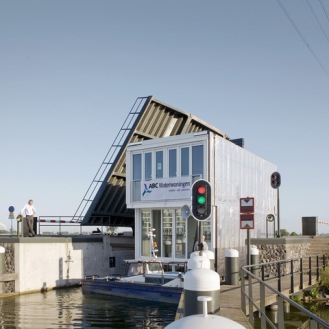 These floating homes on the Ijsselmeer in The Netherlands are connected by docks but give the perception of a seemingly detached layout of water dwellings. The floating homes are supported by concrete “tubs” submerged in the water to a depth of half a story and a lightweight supporting steel construction is built on top. Features such as sunrooms, verandas, floating terraces and awnings can be attached. by Architect MarliesRohmer/Photo Marcel vanderBurg

The Greenstar, a $500 million floating hotel, is one of five floating island projects under development by Waterstudio.NL and Dutch Docklands for the Maldives government. The floating island hotel would feature 800 rooms, a conference room and a golf course. By WaterStudio NL

The Ark is a hotel by Russian design firm Remistudio and is meant to be self-sufficient. The transparent foil roof would allow light to reach plants inside, and the waste produced in the building would be converted into fuel.The cupola is meant to be energy-efficient, and its shell basement with cables and arches is designed to distribute weight evenly to make it earthquake- and flood-resistant. By RemiStudio

There is a saying that “God made the world, but the Dutch made Holland.” And for centuries, the Dutch have built different types of barriers to hold back rising water and allow for development.

But as sea levels continue to rise, instead of trying to fight the water, Dutch architects and urban planners are taking a new approach: finding ways to live with it.

The United Nations’ Intergovernmental Panel on Climate Change reported in 2007 that global sea levels rose an average of nearly 8 inches in the past 100 years and predicted that rate will accelerate in this century. Higher water makes for more severe storm surges, floods and land loss. With many of the world’s largest cities located on coastal estuaries, high and dry urban land will become an increasingly rare commodity.

“In the last decade, floating architecture changed from a fringe niche market into a realistic opportunity for expanding the urban fabric beyond the waterfront,” said Koen Olthuis, lead architect at Waterstudio.NL, an aqua-architectural firm in the Netherlands. For Olthuis, creating floating buildings goes beyond architecture and is about a new vision for city planning.

Rather than putting entire cities on water, most of the proposals today combine water-based buildings with land-based architecture protected against water using flotation fixtures, raised platforms or anchored structures. That kind of flexible, integrated approach is crucial for the future, said Olthuis.

“Instead of buildings that are not able to cope with the changing needs of a city, urban planners will start creating floating dynamic developments that can react to new and unforeseen changes.”

And there’s a range of designs out there, including a float-in movie theater in Thailand and a massive Sea Tree, which uses the model of oil storage towers found on open seas to provide habitat for animals.

One of the most ambitious projects under development is in the Maldives, where Waterstudio.NL was tasked by the Maldives government to design a network of floating islands, including the Greenstar hotel that will feature 800 rooms, a conference center and a golf course. The $500 million project is set for completion by 2015.

Other projects in the works include Baca Architects’ amphibious house destined for the Thames River in Great Britain. During dry times, the home would rest on a fixed foundation but could rise up to 8 feet if flooding occurred.

As the industry expands, Olthuis said the biggest challenge isn’t technology but changing the public’s perception of living on water. To help encourage the transition, designers often make the structures look and feel just like those on land.

“We want to diffuse the border between land and water,” said Olthuis. “That is the first step in the general acceptance of floating cities.”

On the NewsHour this week, we’ll be looking at the impact of rising sea levels on Louisiana’s coast as part of our Coping with Climate Change series.

See our Report on Louisiana